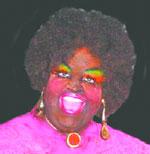 
Let me create a little scenario for you. What if an African-American GLBT person covered himself in white makeup, a la the Wayans Brothers recent White Chicks movie? Let’s say that this person toured GLBT nightclubs across the country as a character called Buford T. Moonshine and used every negative stereotype of Kentuckians or Caucasian people. Finally that person created a promotional website that posted those insulting stereotypes online and sold merchandise emblazoned with those images. How would you feel about that?

Well, you just got a chance to walk in the African-American GLBT/SGL community’s pumps. Many of us are angry with Charles Knipp, the white gay man who portrays Shirley Q. Liquor, a ‘black woman who’s a welfare recipient with 19 chirren’. I’m about to explain why.

Knipp’s show has been criticized and protested by a wide array of groups within the gay community since 2002, including NGLTF, The Audre Lord Project and the New York Black Gay Network. The latter two groups spearheaded a recent protest that canceled a Martin Luther King Day performance scheduled for a New York City nightclub.
In 2002 The National Association of Black and White Men Together said, "We find the Shirley Q. Liquor performance objectionable on three fronts. First, this performance resurrects distorted racist caricatures common to the blackface performances that became popular in 19th-century American vaudeville. Second, the Shirley Q. Liquor character is constructed on a negative and degrading image of women. Third, the character is based on the classist stereotype that people who need public assistance are fundamentally lazy. On all three counts, this act offends current sensibilities of what is appropriate."

It’s interesting (but not surprising) to note HRC’s silence on this issue. NGLTF contacted CafeShops.com and asked them to remove the Shirley Q Liquor merchandise from their website, but it’s still there. They did get rid of the offensive caption that stated ‘Welcome to my boutique of ignunce. Please do not shoplift while you is up in here!"

RuPaul has resolutely defended him since 2002. At a recent Southern Decadence he stated, "Critics who think that Shirley Q. Liquor is offensive are idiots. Listen, I’ve been discriminated against by everybody in the world: gay people, black people, whatever. I know discrimination, I know racism, I know it very intimately. She’s not racist, and if she were, she wouldn’t be on my new CD." RuPaul’s been complaining about the lack of GLBT support for it, but I don’t think he’s considered the fact that it may be the controversial company he’s keeping these days.

This goes much deeper than simply protesting a drag show. Blackface has been used to demean, lampoon, and ridicule the images of African-Americans since the 1830’s in order to reinforce white supremacy. A cottage industry of ‘darkie’ products from household goods, jokes and theatrical pieces such as ‘Birth of A Nation’ arose to support that image. Those images still carry a lot of pain for African-American people.

Shirley Q Liquor makes it harder for the GLBT civil rights movement to gain traction in the Black community. Some African-Americans are already upset about the comparisons to the 1960’s Civil Rights movement and some of that backlash fed into the gay marriage debate. Their impression is that the ‘rich white males of the GLBT movement’ have no understanding, sensitivity or concern for the historical and current obstacles faced by African-Americans.

I know that’s not true, but it’s difficult to argue to the contrary when Shirley Q Liquor’s on stage and Knipp’s GLBT southern white male fan base is hysterically laughing at his antics.

You really need to get a life! If you don't like it, don't listen to it! Ever watched In Living Color? A show produced by black folk who did it all the time themselves. The reason racism is still around is because people like you and the protestors in NY wont let it! You are full of it!

Gee Marshall (if that's your real name) did I strike a nerve?

Sounds like you're another one of Shirley Q's fans who get their panties in a bunch every time ANYONE calls him out for his 21st Century minstrel show which is demeaning and racist to African-American women.

Racism is STILL around because your ancestors encouraged and practiced it for 400 years.

And by the way, I still have the first four seasons of In Living Color on VHS. Shirley Q ain't even i the same league with the Wayans family, much less Jim Carrey.

I read about this in a book about blackface called Black Like You. I can't believe that RuPaul would defend this. Besides being offensive and hateful, Shirley doesn't have much talent.