I understand there's some grousing going on with some peeps in the Houston Black trans community claiming that 'our leaders aren't doing anything' when it comes to the Pinky shooting.

That couldn't be further from the truth.   I actually heard about the shooting on Thursday while watching the 6 PM news.   Didn't find out the woman in question ABC13 was reporting on was trans until the Chronicle's initial transphobic spin on the report was published and it was relayed to me late Friday evening.

This post went up on TransGriot  in response to the problematic transphobic article and to alert the community (and the nation) as to what the facts were at the time I wrote it.   There were some erroneous comments we had to immediately correct that Pinky had been killed.

That initial TransGriot post has not only gone viral (and has over 10,000 hits as I write this), it was linked to by the Dallas Voice and OutSmart magazine where I write a monthly column.

While I ended up in front of a FOX 26 TV camera last night with Houston GLBT Caucus president Mike Webb on the Isiah Factor Uncensored,  it doesn't mean that nothing is happening or that those of us who are considered leaders in this Houston trans community are just twiddling our thumbs.

I'm coordinating with our media contacts.   Both of our HPD LGBT liaisons were in Detroit attending Creating Change when Pinky was shot on Thursday.  I just caught up with one of them on Tuesday afternoon.   They are waiting to talk to Pinky, who was unconscious until Sunday, to determine next steps in this case and to hear from her what happened.  The detective in the case is also waiting to talk to her as well.

Atlantis Narcisse, Dee Dee Watters, Diamond Stylz and Jessica Zyrie are also working behind the scenes in our different lanes to find out what happened    We had allies in TENT ED Emmett Schelling and Eric Edward Schell calling the Houston Chronicle to address the transphobic coverage.

Our colleagues at BLM-Houston are standing by.  Ana Andrea Molina and the trans Latinx community are ready to help along with our Latinx community allies.  Equality Texas is wanting to know what they can do to help.

So are our trans brothers and trans GNC siblings. People around the country are asking me and other Houston leaders what can they do to help Pinky.

But next steps for how we proceed are on hold until we can talk to Pinky.   Remember that she was shot three times at point blank range and is STILL sore from it.   One of the bullets hit close to her throat so she couldn't talk.

We want to give her a little space and time to recover a bit physically and emotionally. 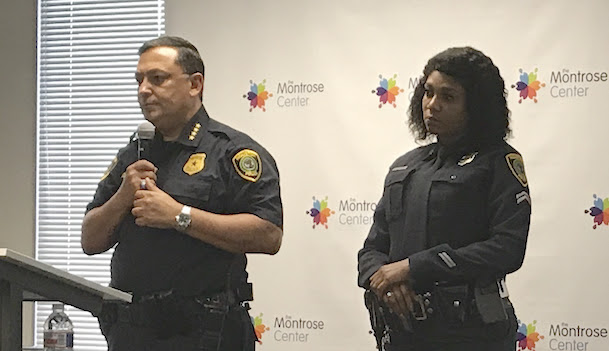 HPD also wants this fool off the streets as quickly as possible.  Anyone who would indiscriminately fire a gun at someone at a crowded gas station is a menace to society that needs to sent to the nearest TDC corrections facility.   Our HPD liaisons EJ Joseph and Alexa Magnan along with the detectives on this case want to solve it as well.

Sometimes activist work is tedious, multilayered and needs to happen behind the scenes, not in front of the unblinking eye of a camera.   If people in Houston Black Trans World were wanting us to head to City Hall and go off on Mayor Turner, the council, and HPD's command staff, not gonna happen.

There are a lot of questions in this case we needed answers to before we take our next steps.

One step we are planning is a Black trans town hall, with date and location to be determined

The thing that we can be most grateful for is that Pinky survived this horrific attack.   Next thing we all want is to get that waste of DNA who shot her off the streets and in jail as expeditiously as possible.  We want justice for Pinky.

But there's a lot of work that needs to happen until those goals are accomplished.
Monica Roberts at 12:00 PM