Mayor Parker Is Helping Us Out, Not Selling Us Out 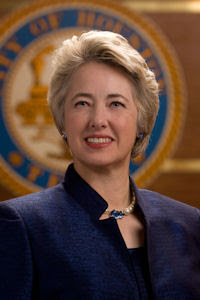 I need to address a loud and wrong conclusion jump that has been coming from certain quarters of the trans community over the last few days that is seriously annoying me and those of us fighting to pass the HERO despite the resistance of the Houston Division of the Forces of Faith-Based Intolerance.

There has been a meme developing not helped by erroneous reporting coming from some parts of the blogosphere not based in Houston that Mayor Annise Parker 'threw the trans community under the bus' when Section 17-51 (b) of the proposed Houston Equal Rights Act was targeted for removal.

Umm, no.  Not even close.  Mayor Parker owes her first election in 1997 as an at-large council member to a dedicated cadre of trans people who busted their behinds, canvassed, block walked and donated hard earned T-bills to that first and subsequent council, controller and mayoral campaigns.   We know her from her Houston GLBT Caucus days when she led the organization.  She has supported and gone to the trans community Unity Dinners over the years and was given an Apogee Award at the 1998 Houston TG Unity Banquet for her leadership as a city council member on the 1998 non-discrimination ordinance.

And we have proudly voted for her.

Is our community finally getting comfortable with the final letter in GLBT? I hope so. But I know some of us still have a long way to go toward real understanding and acceptance. I still recall being advised by some people in those early campaigns to keep the transgenders out of sight! I can only hope that the year of films like Transamerica will mark a turning point for the transgender community
--Annise Parker, OutSmart magazine, November 1, 2009


One of the things she did as mayor was sign an executive order that added gender identity to Mayor Lee Brown's executive order that barred discrimination in city employment based on sexual orientation.  When the Tyjanae Moore bathroom gender policing situation popped up in 2010 along with the harassment of a trans staffer working for Councilmember Jolanda Jones, at Councilmember Jones' behest Mayor Parker signed an executive order clarifying that transpeople in city owned buildings can use the facility that matches current gender presentation and barred discrimination against us in city employment.

So back to focusing on what's happening now in H-town.  The local trans community asked for Section 17-51 (b) to be pulled from the proposed ordinance.   I've written and testified it needed to go.  Lou, Dee Dee, and other Houston trans leaders have also been unanimous in our dislike of it.

What we're pissed off about inside Beltway 8 is you peeps blasting Mayor Parker based on Frontiers LA writing a story and only posting a snippet of Section 17-51 (b) prior to their conclusion jump.  Neither did any of you outside of Houston critics know at the time because you weren't privy to it, we were working with council to get amendments done to clean up that problematic language in a way that would be satisfying to our community.

The problematic section I underlined and put in bold print is why the Houston transgender community and our allies after consulting with us asked to have it pulled.   Leaving that as is would have allowed transphobes to engage in gender policing and we would have no recourse to it.

So did you stop to think before you knee-jerk conclusion jumped to ask me or any other transperson in Houston working to pass the HERO what was going on?  Did you peeps outside Loop 610 honestly think after I wrote this post that I or any other Houston trans leaders would support ANY HERO that didn't FIX the problems that ail the Houston trans community?

We're in what is going to be a long battle to get this passed.  There are times when we won't be able to tell you peeps outside the Houston city limits everything we're working on so that our opponents can't counterprogram it.   There are simply times when radio silence is necessary to get human rights stuff passed.

So the next time you have questions about what is going on in this HERO battle, ask us Houston peeps first okay?

Mayor Parker is helping us out, not selling us out.
Monica Roberts at 12:00 PM