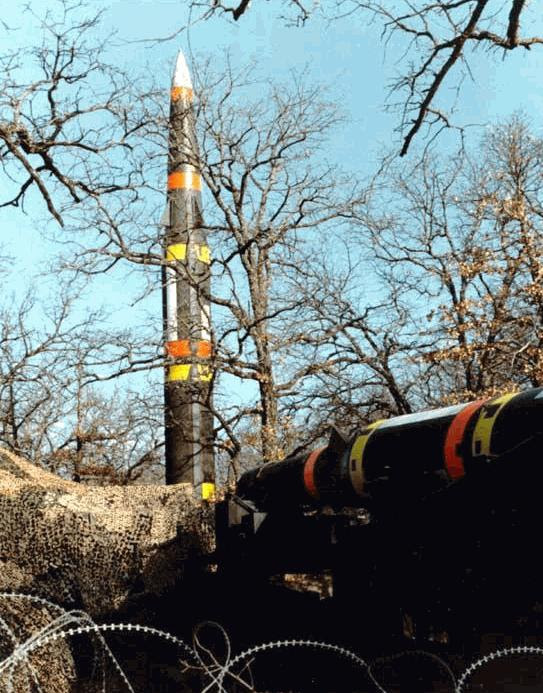 According to a 1997 CIA analysis by Benjamin Fischer, the incident had its roots in Soviet anxiety over the US defense buildup that began during the Carter Administration. The Russians knew they couldn't compete spending and technology wise and feared they would soon be outgunned.

The USSR was also spooked by stepped-up probes of their early-warning intelligence system and other mind games played by the American military starting shortly after Ronald Reagan took office in January 1981.

Whatever the impetus, the Soviet leaders persuaded themselves the US was planning a sneak nuclear attack on the USSR and in 1981 under then KGB Chairman Yuri Andropov ordered their spies to look for evidence in an effort incongruously code-named RYAN, the Russian acronym for "nuclear missile attack."

Soviet nuclear first strike fears were heightened a few more levels in February 1983.  The US prepared to counter the Warsaw Pact conventional arms numerical superiority in Europe augmented by deployment of the mobile Soviet SS-20 intermediate range missiles against NATO by stepping up their conventional military readiness in the region and deploying their own next-generation mobile Pershing II intermediate range nuclear missiles in West Germany.

From their West German bases the Pershing II missiles could reach hardened targets in the Soviet Union in just four to ten minutes.

It also didn't help during this period of heightened tension and deteriorating relations between the two superpowers President Reagan was also ratcheting up the anti-Soviet rhetoric by denouncing the USSR in March as an "evil empire" and shortly afterward announced the SDI "Star Wars" missile-defense initiative designed to create a missile defense shield to make the US invulnerable to Russian nukes.  The mere thought of American military R&D being put to work to make that a reality put the Soviets aging leadership team now headed by a gravely ill Yuri Andropov and their military and Strategic Rocket Forces commanders in freak out mode. 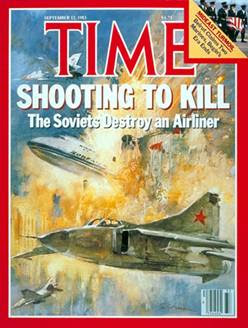 On September 1 Soviet air defense military units in the Far East, under pressure from their upper echelon political and military leadership for responding lackadaisically to previous US military air incursions during Fleet Ex 83 conducted in the North Pacific Ocean, shot down Korean Air Lines Flight 007, which had strayed into Russian airspace and been misidentified as a spy plane.  All 269 passengers and crew aboard the flight were killed, including US congressman Lawrence McDonald who was headed to South Korea.  Former president Richard Nixon was supposed to be on that flight seated next to McDonald but decided not to go on that trip at the last moment.

The US condemned the attack as evidence of Soviet barbarism and the increased worldwide anti-Soviet attitudes and revulsion for the attack on KAL 007 greased the political and public opinion skids to begin the European deployment of the Pershing II's.

Soviet leaders were making the counterargument (and to some extent believed) that the KAL 007 incident was an intentional US provocation and declared that accommodation with the US was impossible.

We also didn't know at the time that in the early morning hours of September 26 if it hadn't been for the cool headed thinking of duty officer Stanislav Petrov, we would have plunged that day into a accidental nuclear war.

Lieutenant Colonel Petrov, who was fortuitously on duty doing an extra shift in the air defense bunker in the Moscow area that day was faced with malfunctioning computers and blaring alarms all over his control bunker telling him five missiles had been launched from US territory.   He knew that if the real thing were happening, the US wouldn't be launching just one to five Minuteman III missiles at the USSR.  Petrov correctly dismissed it as a false alarm and didn't report it to his superiors in breach of Soviet military protocols.  If he'd wanted to play it safe, Petrov would have informed the higher authority immediately.

Had he done so, knowing that Soviet armed forces policy was launch on warning, it probably would have resulted in a first strike attack that killed millions of people based on the mentality of the senior Soviet leadership at the time believing the US was already making preparations to do so and Reagan would order it. Subsequent investigations proved Petrov was correct and the false alarms were caused by a rare alignment of sunlight on high-altitude clouds and the Molniya satellites' orbits.

Further complicating matters and adding to the tense and worsening diplomatic relations between the superpowers was the October 25 invasion of Grenada by US forces in the wake of a Marxist coup in that island nation that led to the Cubans building a military aircraft capable airstrip on the island that concerned the US.   The invasion of Grenada took place two days after the suicide bombing of the US Marine Corps barracks in Beirut, Lebanon that killed 241 American military personnel there. 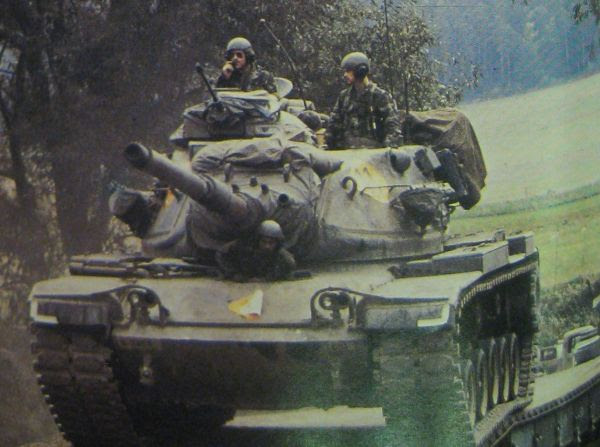 With tensions between the superpowers at code-red levels and especially in the USSR, NATO launched Able Archer 83.   This was an annual military exercise simulating the outbreak of hostilities between NATO and the Warsaw Pact nations that the Warsaw Pact was aware was happening.

But this year's version of Able Archer involved an unusually realistic buildup to a simulated NATO nuclear strike involving the NATO senior political leadership like British PM Margaret Thatcher, West German Chancellor Helmut Kohl and command and control levels of NATO that was scheduled to last ten days. President Reagan and Vice President Bush were supposed to take part in it but decided not to.

The Soviets knew Able Archer was happening but wondered if something else was afoot, having long planned to use war games as a cover for launching a first strike themselves and suspecting the US might do likewise.  The Soviets also had the attitude the only way to preempt a first strike if that is what the US and NATO were gearing up for was to beat them to it and launch their own.  They raised their own state of alert to a wartime footing in order to be in a better position to do so if the attack confirmation intel came from the RYAN protocol.

The increased coded traffic picked up by the KGB between Washington and London in reality was chippy diplomatic chatter being generated because Great Britain was pissed about the Grenada invasion but was being read by RYAN analysts as coordination communication prior to launching an attack.

But the coded traffic combined with NATO forces simulating during the Able Archer 83 exercises the moves and communications necessary to transition from a conventional to nuclear conflict through all alert phases, from DEFCON 5 to DEFCON 1 led alarmist KGB agents to mistakenly report them as part of the Soviet RYAN intel gathering protocols as actual preparations for a NATO first strike on the USSR. 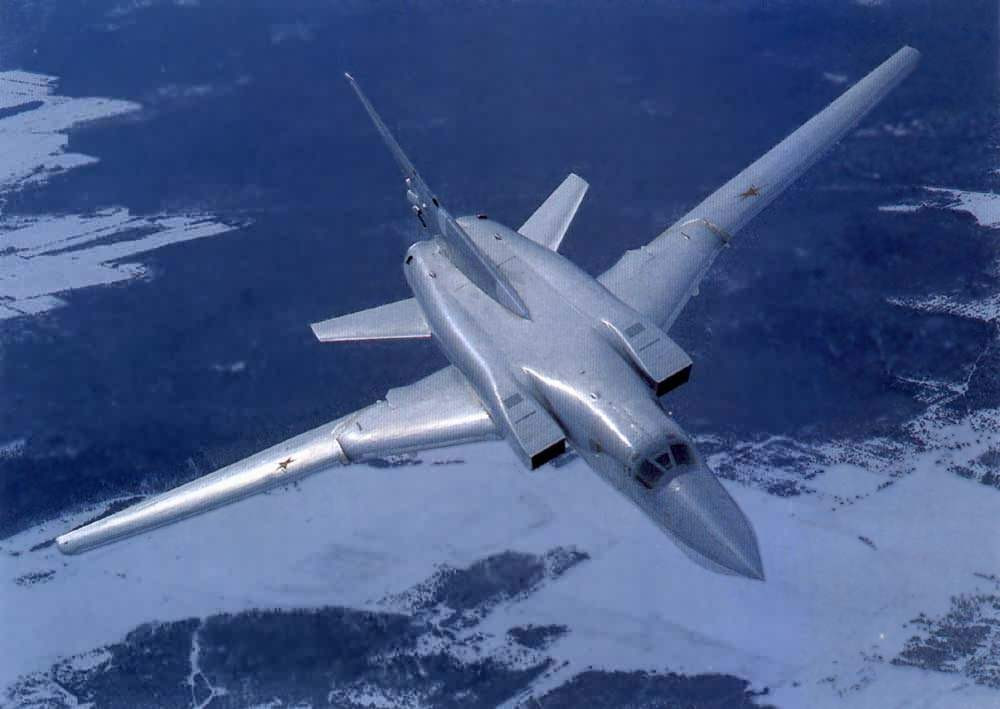 The result was the Baltic Military District in the USSR being placed on alert status along with units in Czechoslovakia, nuclear capable aircraft units in Poland and East Germany being activated and prepped for action and Strategic Rocket Forces ICBM silos and units prepped for launch as the Soviet leadership frantically sent high-priority telegrams from Moscow to its KGB stations in Western Europe on November 8 demanding information about the feared surprise NATO nuclear first strike attack on the USSR.

The CIA picked up on the increased military and civilian leadership communications activity on the Soviet side, but didn't connect it to Able Archer.  Neither did they pick up on the USSR leadership's paranoid national beliefs since 1982 that it was backed into a global strategic military corner and their only way out of it was to launch a first strike.

Granted, the most recent example being World War II of Russia being surprise attacked gave them a reason to be wary, but the USSR's 'America's Going To Nuke Us' paranoia almost ended up triggering World War III. 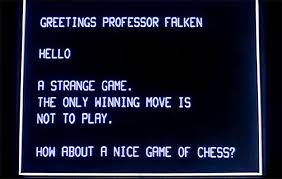 It's also interesting to note that there were several broadcasts, songs and movies released that year with accidental war (WarGames), Men At Work's 'It's A Mistake' and Nena's '99 Luftballons' and nuclear holocaust (The Day After) reflected the public anxiousness about nuclear war.

Little did we realize at the time how prophetic those songs and movies almost became.

Those anxieties eased a bit with the end of the Able Archer exercise, the subsequent death of Yuri Andropov in February 1984 and the restarting of INF treaty talks with the USSR.  But it's sobering and scary to think about the fact the world once again by the slimmest of margins barely escaped nuclear annihilation.
Monica Roberts at 12:00 AM