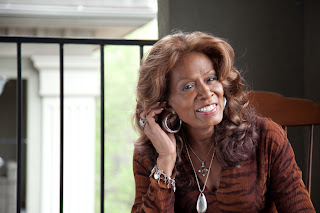 Cheryl Courtney-Evans is another one of our trans leaders this community and others need to get to know and show some love to.

The Kansas City, MO born college educated and now Atlanta based activist moved there in 1979 and worked for the transgender support group LaGender, Inc. While there she received her certification as a transgender peer counselor through a United States Conference of Mayors grant program.

Seeking a better way to serve the ATL's trans community, she co-founded on September 27, 2007 with Minister Lisa Newson TILTT, Inc (Transgender Individuals Living Their Truth), the first transgender support and advocacy organization in the Atlanta area to include trans men.


In addition to her TILTT, Inc.duties, Cheryl participated in a 2009 NCTE Lobby Day in Washington, DC and facilitates workshops and sensitivity trainings.  Her most notable ones were with the Audre Lorde Leadership Conference (ZAMI, July 2009) and at the University of Georgia-Athens in March 2011 when she presented 'The Black Transgender Experience in America' at both venues.

Cheryl is a tireless supporter of human rights issues with a focus on the rights of transgender people and increasing our political and civic participation.

And now it's time for Cheryl to answer the TransGriot's Ten Questions..

1. How long have you been transitioned and who were your trans role models at the time you did so?

CCE-I began my transition when I was 16 (1968), with a 2 and a half year "break" while I attempted to attend college (at that time 'transsexualism/transgenderism' was UNHEARD of, and to do it openly at school was instant "death" of my then aspirations); I had no real 'role models at that time. Locally, there were show,  pageant girls I admired, but didn't see myself in that space. I heard and read about Christine Jorgensen and ; Renee Richards, but only dreamed I might get to where they were, never actually believing I could become as affluent and well known.


2. If you had the power to change one aspect of the Black trans community, what would it be?

CCE- I would make it possible for them all to have housing they would not have to worry about losing. I feel that the very foundation of being able to navigate or facilitate some sort of success, is to have a "base of operations" so to speak. It cuts down considerably on the amount of brain power used primarily for SURVIVAL, leaving one able to concentrate more on means of upward progress & mobility.


3.Who are the up and coming trans leaders in your area that have gotten your attention?

CCE- I'd have to say for some years now, Dee Dee Chamblee (the founder and Executive Director of LaGender, Inc.) has gotten some attention. She has, in the past, done some great things with regards to the transgender community; I don't know exactly what LaGender, Inc. is doing these days, but she herself has been asked to the White House as part of the National Gay & Lesbian Task Force's "Movement for Change" initiative (I think that's the name of it). I think that's all I'll say about her, as we haven't spoken for some time (we haven't seen 'eye to eye' for some time, lol).

Tracee McDaniel (founder of Juxtaposed Center for Transfomation, Inc.) is getting some attention; her organization works to try helping trans folks find jobs and refer them to food resources. I'm not absolutely what else they do. She has some great connections, and manages to put together trans events like the annual Sylvia Rivera event every June during 'Stonewall Week' (the weekend of the Stonewall Riots) & an annual Transgender Day of Remembrance. She also happens to be a TILTT, Inc. member. I suppose one might say I'm beginning to be a transgender woman of note, as TILTT, Inc. (which I founded and am executive director of), becomes more well known (you may visit www.tiltt.org to see what we do; we're a support & advocacy organization).


4. What are the major differences in the Black trans community now and when you first transitioned?

CCE- The younger girls are the biggest difference; they are taking concrete steps toward transition at earlier ages; hormone therapy, implants, etc., than we were even capable of doing. When I was young and coming up, the closest most of us black girls could do was talk our various bio girlfriends out of their birth control pills, hoping to get enough estrogen to develop breasts. Another difference is that there seem to be more young trans women who don't care anything for the "traditional" male/female sexual roles we followed (and are quite open about it).

5. What are some of the projects or things you are currently working on?

CCE- One of the projects I am working on is trying to influence, motivate or otherwise inspire other folks to become committed around establishing a transgender focused homeless shelter or transitional housing; meanwhile trying to work on the existing establishments to make changes to accommodate the transgender community.


6.What are the things you believe we need to do as Black trans leaders locally, statewide and nationally?

CCE- Become involved in politics as well as make sure our voices are present "in the room" whenever any public policy or issue in the greater community is at stake.  Public transportation fares, taxes, rent increases, et cetera affect ALL of us. We don't exist in a "transgender bubble".

7. Do you believe that race and class issues are far too often left for African-American and other POC transpeople to tackle?

CCE- Yes. Too often whites (and many times other races, who are generally treated better by the very virtue of their origins, having not been slaves here at one time), operate from a space of privilege, so they are not as concerned with it.


8. If you could have dinner with five transpeople past and present, who would they be and why?

CCE- Sylvia Rivera; when I was graduating, I was watching the news about the Stonewall riots, wishing I could be there and silently rooting for them. I would love to talk to her about what it was actually like being there. Marsha P. Johnson; so she could tell me where she drew the strength to do all the trans-positive work she did. (And this is not a "suck up", lol) I'd love to have a dinner with you, as I've grown to love/respect your knowledge expressed in your postings, as well as your willingness to participate in the political process (and I see that as a must for us). Tracee McDaniel and Lisa Newson (I've mentioned Tracee already; Lisa is very instrumental in transgender HIV/AIDS testing and prevention here, although she hasn't become a "public figure" yet); I'd love both of these ladies to be present just because I like them very much and appreciate what they do for the transgender community.


9. What's the one misconception about you that you want to set the record straight on?

CCE- I can't think of any; my life is pretty much an "open book", so anyone that would look at me and my life with an objective eye wouldn't have any. They'd pretty much get the correct idea right away.


10. Where do you see the African American trans community ten years from now?

CCE- Monica, to tell you the truth, unfortunately, unless we're able to motivate the younger African American trans women and men to step up much more and take part more in the world around them (politics, social change, et cetera), I don't see us being much further than we are right now.


Thank you, Cheryl for your time and hope you TransGriot readers enjoyed this Ten Questions  interview.